The goal of the study was to determine the effectiveness of Natural Joint Integrity (NJI) in reducing pain and improving mobility.

Thirty participants (14 females and 16 males) were involved in the study. The age range of the participants was 37 to 72.

They were randomly divided into two groups. They were instructed to take two capsules in the morning and two in the evening; 15 received orally two Natural Joint Integrity capsules and 15 received two placebo capsules.

The treatment period was six weeks, with weekly evaluations. Participants were prohibited from taking any medications except the supplement being studied.

A subjective assessment of participants’ joint pain, joint tenderness, pain at rest and walking, and ease of performing various tasks of daily living was conducted weekly. Pain and related morbidity were quantified, employing a scale of 1 to 10, 10 being most severe. Ability to engage in the activities assessed was a prerequisite for entry into the study.

Twelve out of the 15 in the Natural Joint Integrity group reported improvement after the first six days of the trail. The greatest difference between the groups was seen after four weeks. Seven of the Natural Joint Integrity group reported improvement in overall mood and increased energy level in performing all their tasks after three weeks. The improvement steadily progressed throughout the study, and most impressive decrease in pain and functional severity score started to be evident after the fourth and the fifth week.

Fourteen of the Natural Joint Integrity group became pain-free after six weeks, while only one of the placebo group experienced moderate pain relief. No adverse effects were reported by any of the participants. All 30 completed the study. 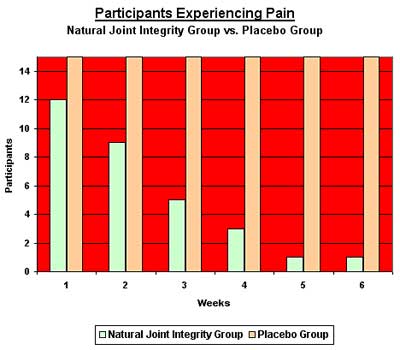 Observation: Fourteen in out of 15 of the Natural Joint Integrity group became pain-free after six weeks, but only one of the placebo group experienced moderate pain relief.